By now you’re probably heard the bruhaha surrounding the prices being charged for Bruce Springsteen 2023 concert tickets. But in case you’ve missed it, here’s the story: fans are inflamed because Ticketmaster is using demand-based pricing algorithms – and of course Springsteen tix are in high demand.  The result? See for yourself: 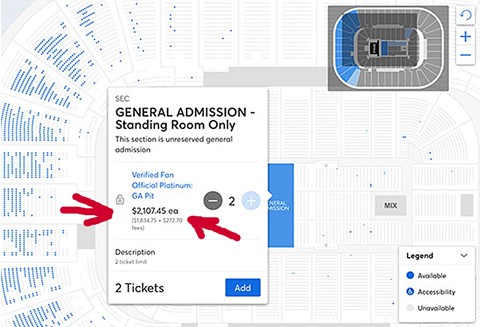 Why is this relevant to retailers? Well, it’s a fine example of the truism that, “just because you CAN do something, it doesn’t mean you SHOULD!” In this case the issue is dynamic pricing.

In retail, price has been the top value driver for a very long time. As far back as RSR’s 2009 benchmark on the state of Retail Pricing, we noted that increased price sensitivity of consumers ranked as one of the top-3 business challenges for retailers. Retailers know that even though offering a low price may not win new customers, having high prices will certainly cost them existing customers.  That is why retailers consistently tell RSR through our benchmarks that consumer price sensitivity remains a top business challenge. To illustrate: in RSR’s 2021 benchmark on the state of Merchandise Planning, the highest ranked business challenge was that “our customers have become more price sensitive than ever”, according to 61% of that study’s retail respondents.

In our 2022 benchmark study on retail pricing, retailers’ concerns were amplified.  In fact, the top-2 business challenges cited were consumer price sensitivity and aggressive pricing from competitors.  That is causing many to look at how they manage promotional pricing in particular.  And while personalized pricing holds some future attraction, dynamic pricing does not.

Back in 2016, RSR noted that retailers were fascinated by the idea – but that was in all likelihood just a response to Amazon’s demand-driven pricing.  By 2017, we noted a drop in retailers’ interest in dynamic pricing; our benchmark on the state of retail pricing that year noted that “retailers are evolving their perspective to one focused on a wider, longer-term view of influencing customer behavior, instead of quick hits like those offered through dynamic pricing.”

The whole idea of dynamic pricing in the store gets a lift from two technologies in particular: electronic shelf tags (ESL’s), and AI.  ESL’s have always been a bit of a hard sell in the U.S., although the technology has achieved more widespread adoption in other parts of the world.  In our forthcoming study of the state of the retail store (scheduled for publication later this month), only 41 percent of retailers who responded to our survey assigned “high value” to ESL’s – and that is being driven almost entirely by over-performing “Retail Winners (49% compared to only 24% for other retailers).

In the case of AI, the focus (at least according to our 2020 benchmark on the state of AI adoption in retail) is on predictive modeling of things like price changes and promotions, and secondarily promotion optimization.

A Solution In Search Of A Problem?

It’s easy to conclude based on anecdotes and tidbits like those above that dynamic pricing – particularly for omnichannel retailers – is a solution looking for a problem. But the subject keeps coming up – probably because it has been a successful tactic in other settings.  A recent McKinsey Insights piece made that case:

It’s a staple of the travel industry: dynamic pricing is the norm for airline tickets, hotel rooms, and ride-sharing services. In e-commerce, Amazon has long been a leader in dynamic pricing; the company reprices millions of items as frequently as every few minutes.

But the same article “gets real” in the next sentence:

Despite the competitive advantage that dynamic pricing can confer, few omnichannel retailers have developed this capability. Some are only now starting to explore the potential of dynamic pricing. Other retailers conducted half-hearted and poorly planned pilots that, unsurprisingly, had little impact and thus failed to get the organization’s buy-in.

I’m not sure it’s really an issue of poor planning.  Retailers continue to tell us that consumers are remarkably price sensitive, and don’t like to feel like they are being jerked around.

So, our advice: When it comes to dynamic pricing in the store, let the retailer beware! Sure, technology can support the tactic – but, just as Bruce Springsteen is finding out, consumers may not.