Ask retailers what stands in the way of making progress – on any manner of retail-specific topics – and the response will often start as it does in Figure 1 from our latest research report, Retail eCommerce In Context: The Next Iteration.

Retailers lack the resources and the vision to change, and even if they had both of those, they say their existing technologies would get in the way. When it comes to the online shopping experience, these faithful tenets are front and center. 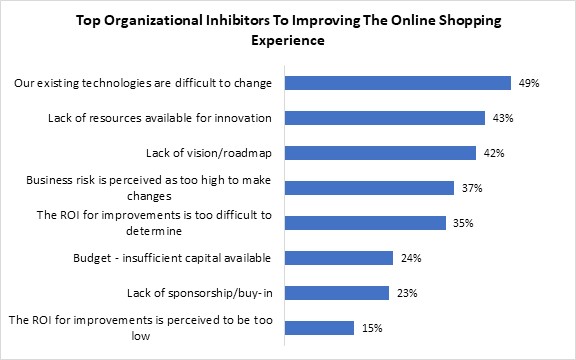 However, when viewed through the lens of performance, this data becomes a lot more interesting, particularly as it relates to the issue of pre-existing technologies. As we’ve uncovered in numerous research projects leading up to this report, Winners are much further along the path towards getting their existing legacy systems to work and play well with more of the exciting new technologies and microservices they want to integrate into their technology stack.

It’s an area of tremendous ongoing focus and effort. As a result, they show us in Figure 2 that this modernization is of far greater concern to them than it is for their average and under-performing peers. In many cases this will mean upgrades – in some it will mean outright replacement. Either way, Winners recognize the importance of adaptability in regard to legacy systems, outweighing that of even budget and vision. 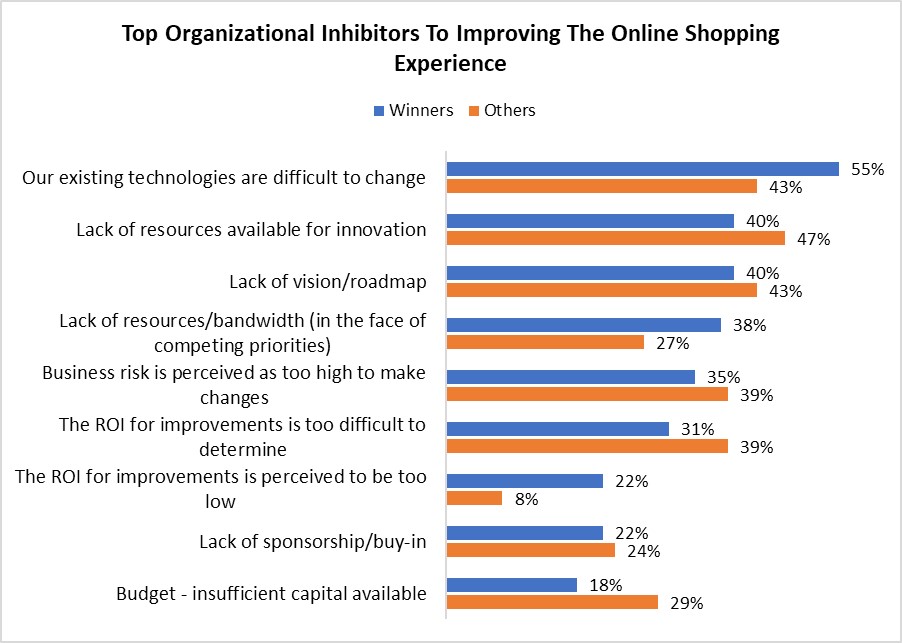 While Winners are only slightly less hamstrung by such things as lack of vision (a mere three-point difference separating them from their peers), lack of corporate buy-in (a two-point difference), lack of resources (seven points) and obstinance due to inflated perception of risk (four points), it is the 11% between them and everyone else reporting budget constraints as an impediment that is most interesting. Insufficient capital is an issue for roughly one in four Winners, whereas that number jumps to nearly one in three for average and under-performers.

With more budget, more sponsorship, more road mapping, less perceived risk and more ability to prove ROI quickly, Winners are well-poised to pull away from the pack once they clear their existing technology hurdle. Make no mistake, this will be no easy task for Winners, but once it is accomplished, it would appear they’ll be headed for smooth sailing.

It’s easy to underestimate just how dangerous this news is for those retailers whose sales are already currently in peril: They have likely yet to realize just how much their legacy technology stack is an impediment, because they still have yet to address any of these prerequisite impediments in meaningful ways. Once they do, the harsh reality is that they will only be where Winners are now, leaving them even further behind the curve.

We hope you take some time to read the full report, available free of charge to all right here.