It’s no secret that merchants are facing challenges from all directions to their merchandising practices – oftentimes from unexpected new sources. However, what is surprising is how much less the best retailers focus on out-of-stocks (once their biggest problem) compared to the plague of consumer price sensitivity.

The way they see it, aggressive competitors have conditioned shoppers to care more about price than anything else. Take a look at what they told us in our most recent research around merchandising. The question is: are they right? 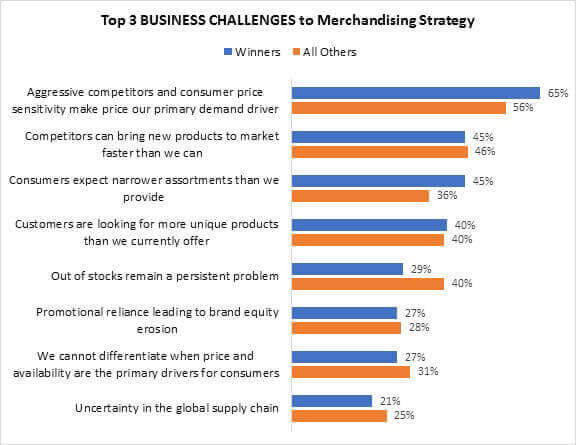 We saw this trend emerging in last year’s research. From that document:

Winners are even more likely to point to consumer price sensitivity as a trigger…and are therefore more likely to engage in price wars over similar products: what we’ve long called the race-to-the-bottom. What this data reveals is troubling: in the modern age, when so much is technologically possible, the importance of delivering a desirable product has become lost. Far too many retailers have accepted a world where space-age technologies’ best application is to help them drive competitive pricing – in effect – purely to mitigate the bleeding. On the contrary, this should be a time when merchandising wonders are far more commonplace than they have been.

And yet this year, this has become an even bigger problem for larger retailers; 74% of those with over $5b in annual revenue most frequently cite consumer price sensitivity as a top-three challenge, compared to 58% of those under $250m. It is critical that retailers recognize that there’s more to sustained customer loyalty than price. If proof is needed: Amazon.com no longer has the lowest price on many goods. Convenience, community, service, interesting products – as we stated in the intro of this report: everything matters. Not just price.

Meanwhile, Winners report a vastly different set of operational challenges to executing a more effective merchandising strategy. The better their sales numbers, the more concern they have around markdowns (which is an outcome of poor sell-though) and cross-channel complexity (Figure 2). 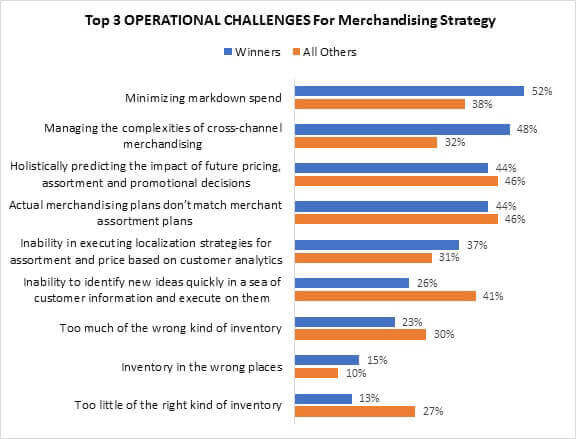 As one might expect, when viewing these same challenges by retail vertical, markdown is a bigger issue for apparel retailers than those selling general merchandise (56% to 40%, respectively). However, the data revealed in merchandise planning questions helps explain a great deal about that need: Fashion retailers are much more likely to report actual merchandising plans don’t match merchant assortment plans than anyone else. Indeed: selling highly replenishable goods has its advantages on both the planning and selling sides of the business. But by attacking the planning side in a more tactical way (i.e. via trusting more of today’s highly capable tech-enabled planning solutions), those whose assortments are constantly changing reduce the inherent risk associated with markdowns in the first place.