Full disclosure: I’m an ex-CIO and have worked most of my entire adult life in and around the tech “bubble”, and most of that time it was in the retail industry. I’m as likely to go down the tech rabbit hole as anybody – it’s fun, I learn a lot, and I get to be around smart people. But I’m also a partner at RSR, and our position from the very get-go has been that retailers don’t really care too much about the technologies available per se, as much as they do about what the available technologies can do for them and their businesses. It’s a core tenet of our brand; we stay focused on the “business use cases that drive technology adoption”. You should too.

We didn’t learn this bit of wisdom in a book. We learned it the hard way, when we were younger retail technologists ourselves… but at least we learned! True story: the RSR team was talking to one entrepreneurial technologist a few years ago about how his AI-enabled solution used state-of-the-art algorithms that created models to predict future demand with never-before seen levels of accuracy; when we asked him if he could bring the level of rhetoric down to street level so that a retailer might understand it better, his response was, “they don’t need to understand it! What they need to understand is that I have a Ph.D. in math.” We never heard from – or of – him again.

We have yet to work with anyone from a technology firm that doesn’t believe that their solution is built with the best technology. That wonderful enthusiasm is fun to be around and even addictive, and if someone on the team didn’t feel that way they probably need to get into another line of work. But solutions providers can really get wrapped around the axle of their own jargon, dropping acronyms and tech terms like pearls of wisdom. After a while it all becomes like a game of Buzzword Bingo. By the way, “Buzzword Bingo” is a real thing – just google the term and you’re likely to find something like this: 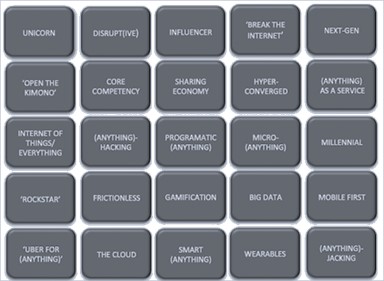 If you are part of a technology Sales or Marketing team, test yourself to see if you can avoid using one of these terms when speaking with a retailer. That isn’t as easy as it seems!

The RSR team tries to help our clients steer clear of Buzzword Bingo, but in today’s environment it’s nearly impossible. The current raft of buzzwords includes such terms as Microservices-based architecture, Cloud-native, SaaS, Headless, API-first, Open-source, AI-Enabled, Platform, and Data-Driven (just to mention some of the more common ones).

But as luck would have it, we had a recent opportunity to test our theory that retailers get an allergic reaction to techno-terms in a survey we are conducting for a client. When we asked about 50 retailers, “Which of the following criteria are important to you when considering future technology investments?”, here’s how they answered:

It doesn’t take a rocket scientist or a Retail industry analyst to figure out what this result means. Plain and simple, 40% of the retailers we queried don’t care!

Technologists, get the message! Don’t force your prospects, clients, and bosses to play Buzzword Bingo. It’s a game you’re likely to lose – why risk your success in such a pointless way?

There’s a lesson from history that every technology advocate should think about. In the 16th Century, Franciscan missionaries successfully conducted their pastoral activities in the New World by learning to speak the many languages of the indigenous people who lived there. Our task as retail technologists is not that difficult. Instead of forcing retailers to learn the arcane language of technology, we all just need to talk in business terms.