Just Exactly What Does ‘Innovation’ Mean In Retail?

On paper, the retail business model is simple: (1) conceptualize a brand identity and a unique value proposition, (2) create some excitement around the brand, (3) buy products in the context of the brand and value proposition, (4) distribute andre-sellthe products, (5) observe what happened and adjust accordingly, and (6) do it again. If we’re being hoity-toity about it, we could call this a “virtuous cycle of continuous improvement “.

The fact of the matter is that retailers don’t usually go all the way back to the topto challenge their fundamental value proposition. Instead they go to step #2 ( “create excitement “) or maybe even step #3 ( “buy products “) and keep cycling until it doesn’t work anymore. When that happens, retailers tend to back up one step at a time. First, they’ll ask themselves if they’re really seeing what’s going on in the business (that’s fertile ground for Business Analytics solutions). Then they might look at how they get products to market – that’s where Supply Chain solutions, e-Commerce and the Stores come into play. Retailers will then examine if they’re creating enough excitement to trigger demand – and that’s all about Marketing.

In the meantime, disruptors keep disrupting, and innovations keep emerging and they get either adopted or rejected.

A lot of the improvements that have happened in retail are really about executing those middle steps of the cycle (create some excitement around the brand, buy, distribute andre-sellthe products, observe what happened) to the best of a retailer’s abilities. In truth, improvements in those steps of the cycle haven’t really required a lot of ground-breaking innovation (although deploying a new technology may be involved), as much as ruthless execution. This reminds me of a conversation I heard with Sir Richard Branson some years ago. I paraphrase, but here’s the part of the dialogue I remember most clearly:

Interviewer: “Sir Richard, what is your process for innovating with companies like Virgin Atlantic? “

Sir Richard: “The only thing innovative about Virgin Atlantic is that we’ve taken a well-defined business model that’s been poorly executed, and execute better. “

I’m not suggesting that successful businesses aren’t innovative, but the term is over-used. To visualize, think of baseball hitting legend Ted Williams. Those who love the sport know that Williams obsessed about the art of hitting. Sometime around 1959, TV impresario Ed Sullivan had Williams and another baseball legend, Willie Mays, on his Sunday night broadcast. Sullivan asked Williams (again I paraphrase), “what’s your secret? “, and Williams went on to give a mini-clinic then and there. Then Sullivan turned to Mays and asked the same question. Mays responded, “I close my eyes and swing! ” (cue laughter from the audience).

Both men were feared hitters, but baseball insiders also remember Williams as an innovator. For example, baseball bats at the time were heavy and thick, but Williams shaved the bats and baked them to dry out the resins in the wood and harden them. Both innovations are accepted as baseline expectations today. There are a lot of hitters that use those innovations (whether they realize it or not), and are still mediocre. Execution matters.

“Disruptors ” aren’t necessarily “innovators ” either. In a January 2018 report, RSR examined how industry “disruptors ” do what they do (How Retail Disruptors Drive Industry Change, RSR Special Report, January 2018), and we learned that:

Disruptors focus on three main things: the best products, delivered in the fastest, most responsive way, through the best customer experience.

They focus on delivering on their promises consistently – and profitably.

Disruptors’ attitudes toward technology are fundamentally different from non-disruptors. They will do whatever it takes to execute on their strategy, and they won’t let slow, old technology get in their way.

Notice that not one of those behavioral attributes have anything to do (necessarily) with adopting the latest innovation. Disruptors are more likely to be those who execute better- just as Sir Richard Branson described. Innovative technology can really help, but primarily as an aid to improve execution – that’s what Ted Williams demonstrated.

When Real Innovation Kicks In

So when does “innovation ” become absolutely critical to success? Sometimes executing business processes to the nth degree of precision just isn’t enough, and that’s when retailers need to go back to look the value proposition and ask themselves “what’s so good about our experience that consumers will pass up our competition and experience it with us? ” Perhaps they should even go all the way back to the fundamental question, “who are we and why do we matter? ” There’s nothing like a “burning platform ” to trigger innovative thinking!

The people who created the original innovative model saw holes in markets and decided to exploit them (Sam Walton comes powerfully to mind). But today’s retailer leaders are looking primarily outside their businesses for clues, as our forthcoming benchmark study on innovation in retail (TBD mid-September) tells us: 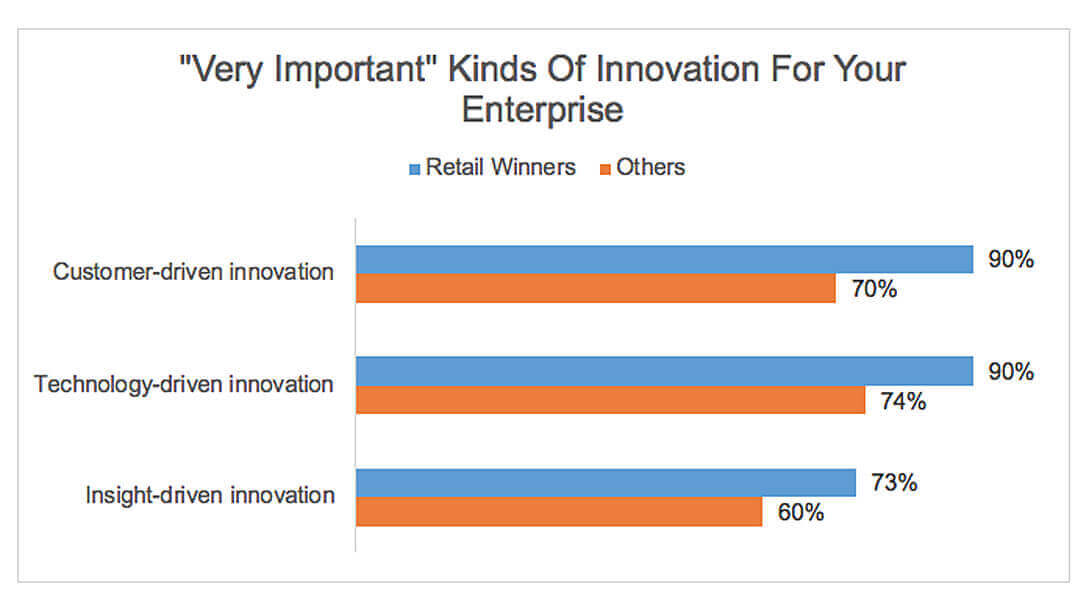 What jumps out of this response is that retailers aren’t primarily looking inside their own organizations to trigger innovative thinking. Instead, they first look at what consumers are doing with technology and then at what the technology companies are coming up with in their labs. For over-performing Winners, that may make good sense – after all, they’re already Winners, and so the opportunity for them is to make “good ” even better.

For average and under-performers, the implications are troubling, as if they can‚Äòt find the leadership within their organizations to come up with new ideas that enhance the brand’s value proposition to consumers. Looking at what consumers are doing with information and technology to get clues is great, but if all retailers are doing is trying to keep up with consumer expectations, it’s hard to see how they will ever be anything but followers.

On the other hand, working with technology companies who are pushing the envelope with revolutionary technologies might yield some startling new ideas. But retailers must remember that tech companies build to “probable future ” scenarios, and once in awhile they get way too far out in front of society. For example, IBM is one of the world’s great companies, and has received more new technology patents than any other company for 25 years straight (the company received 9,043 patents in 2017 alone!). Some subset of all the innovations coming out of the technology world will find their way into everyday life – a small subset.

Where innovation really happens is in how businesses envision and develop their brand value proposition. Process and technology then become merely means to the desired outcome. Innovative ideas can really help make that happen, but all the innovative ideas in the world can’t save a lousy concept. And so, when retailers think about the need to innovate, they should start with those basic questions, “who are we and why do we matter? “, and “how can we create an experience so good that consumers will pass up our competition and experience it with us? “.