Is Retail In China A Harbinger Of Things To Come In The US?

One thing I’ve been saying pretty consistently during the pandemic is that retail sales in nascent categories like apparel, certain general merchandise and luxury would boom when vaccine levels finally reached critical mass. I also have said this boom would likely be temporary. There are a lot of headwinds to come, including the end of stimuli, a significant number of people working from home… forever… inflation and a recognition that maybe some of the things we did during lockdown weren’t so bad (like buy online, pick up at curb) after all.

To see what some of this picture looks like, we must look to China. As far as we know (given China’s general lack of transparency, I’ve got to put caveats around my statements), China was an early sufferer and rebounder from the pandemic. Certainly, from a supply and industrial output perspective, China has improved year over year, but as Bloomberg observed, the consumer side of the economy is weakening (see Figure). 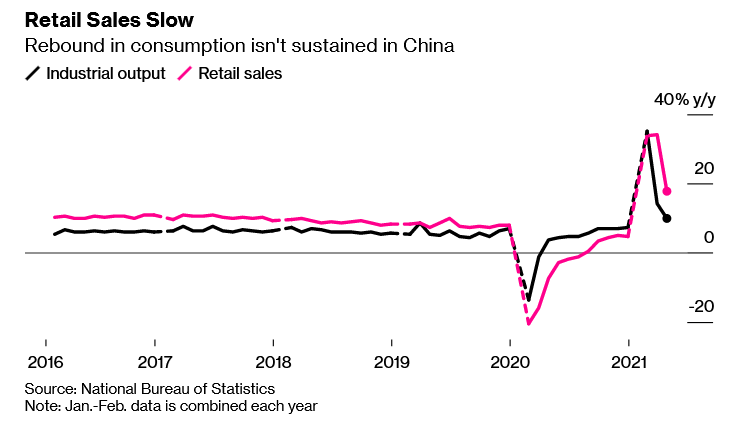 We can see from this figure that over prior years, China was trundling along at a nice steady growth clip. Then, of course, came the lockdowns in 2020 and China was the first major economy to come out of its homes and start making and buying things again. While the figure above seems to indicate that sales and output are stabilizing at more typical growth rate, the trajectory is worrisome. To quote Bloomberg:

“The data underline that while China remains a global growth driver and source of demand for commodities, the economy’s expansion may have plateaued as policy makers seek to rein in real estate and scale back infrastructure stimulus before new growth drivers of consumer spending and manufacturing investment have recovered.”

And here we are in the US. Having decided that they might catch more remaining unvaccinated “flies” with honey than they would with vinegar, the CDC abruptly changed its guidance on what vaccinated people can do vs. the unvaccinated. Long story short – no more masks in most situations. Retailers are responding and as of this writing, Walmart, Trader Joe’s and Costco have eliminated the mask requirement, while Target and Macy’s are standing firm in requiring them. Still, you can get vaccinated outside of subway stations, in most pharmacies, and if you live in Ohio, getting a vaccine between now and July 4 enters you in a lottery where five randomly drawn people will win a million dollars apiece! Talk about honey.

Still, the CDC’s decision has met with mixed emotions by the populace, who at minimum, are suffering from collective PTSD, yet crave some kind of return to normalcy. There are also concerns about unvaccinated children and others who are unwilling or unable, for whatever reason to take the vaccine. I confess to being unambivalent. The mask is off, absent being asked to put it on at some location or another and I fully expect to be taking a booster shot sometime this fall (I had my first jab on January 4). There is also some data indicating that asymptomatic vaccinated people don’t spread the disease, as previously thought.

But let’s get back to retail, and a topic I’ve been pondering for a while. Sales forecasting is not going to be easy. Not in 2021, or even 2022. I expect to see a blockbuster holiday season this year, for sure. And then, I expect to see a curve like China’s. Consumers will drain their savings, will realize they really just don’t need as many clothes as they used to, and (speaking from personal experience), get tired of the return to restaurants. It’s likely going to be a cold winter, in every way.

So where does that leave us? Unlike China, we’re not in a position to scale back infrastructure stimulus, as bridges crack before our eyes. Real estate, which is also booming in China, is likely not going to crash any time soon. There are certainly inflationary fears.

But what it means for retailers is the same thing we’ve been saying for some time. We need to be more agile. The entire value chain has got to be the same. Rapid response to demand and avoiding flooding the system with inventory of some items while starving it of others (buying a new toaster oven proved to be a bit of an adventure over the weekend, but I finally found one I wanted that wasn’t too, too complicated). Looking again at the chart above, we can see that four-week lead times to receive product is problematic. The whole peak may not last longer than eight weeks. And, while we can use AI and machine intelligence to help figure out where to source from, the “how much” side of the equation may indeed require a return to the days of merchandising by “gut feel.”

These are interesting times. Yeah, Confucius was right. That’s a curse. And it means we really need to tread with caution and cleverness.