In A Disrupted World, Take Care Of Your Employees

Several weeks ago, I talked about the data Steve and I have been gathering for a benchmark report on workforce management in the age of disruption. At the time, we were just starting to go through retailer responses, and now we’re pretty darned close to having a finished product ready for you to download and read. You’ll be getting an announcement in your in-box either this week or next, followed by an eBook (our condensed version) a week later.

In the meanwhile, I thought I’d give you another preview: a richer taste of what’s to come.

As most of you know by now, we base a lot of our research reports on the differences between Retail Winners (defined by us as those whose year-over-year comparable sales exceed the average) and their less-well-performing counterparts. The data we gathered from this benchmark was an object lesson in those differences.

While I could cite differences in perceived business challenges, and the role of the in-store employee in general, it’s really much more interesting to talk about the opportunities retailers believe they have in the middle of this mess. Retail Winners recognize their employees have become ever more important as frontline workers. Those workers put themselves at risk to put food on our tables and kayaks in our hands.

What’s most exciting to us is that those Retail Winners are putting their money where their thoughts are (Figure). 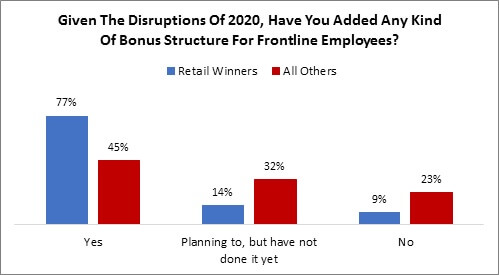 Certainly the consumer press has reported on the bonuses Walmart and Target are planning to pay employees for the holiday season. Lowe’s also gave significant bonuses to its hourly employees. These are high profile companies. But looking at the data, more than three quarters of Retail Winners have joined them in creating this type of bonus structure. Less than half of all others have done the same, with the other half either “thinking about it” or definitely not planning to do so.

It’s not lost upon us that Walmart, Target and Lowe’s are in retail segments that are doing well in the pandemic. So, it would be easy to say, “Of course they’re giving money to keep the ball rolling.” But the reality is that the ball got rolling because of those same employees, basically risking their health to service customers for little more than minimum wage.

Other retailers might say, “Well, unemployment is high. These people are lucky to have jobs at all.” That also would be a mistake. We won’t name names, but there are companies that squandered the opportunity to reward and reinforce employee loyalty. They’re trying to fix their mistakes now, but there are some things a consumer never forgets. Consumer loyalty might be more fragile than employee loyalty.

There’s no doubt we are in the next wave of COVID infections. Hospitalizations and total new cases are rising. We have yet to see if the death rate will follow, as it’s a trailing indicator. There is some sense that doctors have gotten better at treating the disease – with a few high profile (very), high risk individuals in the U.S. recovering relatively quickly from the virus. Still…numbers are rising and show no signs whatsoever of slowing down.

There’s also no doubt that the holiday shopping season is fast approaching. While we won’t have the kind of Thanksgiving and Black Friday in-store madness we’ve seen over the past decade (and good riddance to that, by the way), we fully expect to see contactless and in-store shopping at saner, but substantial levels. It could well be a decent holiday shopping season.

In any season, employees are important. In fact, in the same study, 70% of Retail Winners strongly agreed that customer-facing employees have a strong impact on their annual sales, vs. only 43% of other respondents.

This is not to suggest that all an under-performer’s problems can be solved by throwing money at its workforce. It IS to suggest, however, that rewarding employee loyalty is a key differentiator between Retail Winners and other. It’s a step to take.

There’s a lot more we’re going to say about the role of the workforce in a world of disruption. This is just a taste. But it’s an important taste. The retail industry has been blessed with a workforce that tries to solve shopper problems, even as it takes care of itself. A thoughtful retailer will ask itself, what does your workforce mean to you, and how important is consistency in a world where literally anything can happen?

The answers to these questions may spell the difference between success and failure in troubled times.