Getting Our Arms Around Sustainability

Sustainability is a subject that has gained popularity with consumers in recent times, but one that is also hard to define. RSR has wanted to develop a benchmark on sustainability for several years, but the term is so broad that it invites lots of different possibilities, everything from electronics manufacturing to datacenter operations, from ethical raw materials sourcing to clothing recycling, from organic farms to spoilage reduction – and a whole host of other angles to pursue.

In 1993, Fortune magazine published a ranking of the top 10 companies leading in efforts to tackle environmental issues (FYI, that list included AT&T, Apple Computer, Clorox, Dow Chemical, IBM, and Xerox). The article[1] prefixed the list with a comment that put the “green” movement into a time context: “When Americans first demanded a cleanup of the environment during the early 1970s, corporations threw a tantrum. Their response ran the psychological gamut from denial to hostility, defiance, obstinacy, and fear. But today, when it comes to green issues, many U.S. companies have turned from rebellious underachievers to active problem solvers.”

The question is, who is pushing the “go green” agenda? Producers? Retailers? Government? Consumers? The answer is probably “yes” to all. Women’s Wear Daily recently published an opinion piece[2] that highlighted the somewhat symbiotic relationship between the parties that create consumer demand for environmentally responsible products. For example, the article pointed out how retailer Patagonia has led the way in encouraging consumer demand for sustainable products – and then meeting that demand: “Patagonia has always been a strong advocate for the environment, but this business and others also know the time is right to crank things up several notches, as consumers increasingly choose cause-based brands.

Manufacturers have a huge role in getting “the world” focused on important environmental issues. For example, WWD also noted that, “at CES this week, it has been a major theme across keynotes and exhibitors. It also prompted fashion and tech to join forces in a new way: Samsung and Patagonia partnered on a new project to reduce the environmental impact of microplastics shedded during the laundry process. They codeveloped a new washing machine filter to mitigate microplastics emissions at the end of wash cycles, in an effort to stop them from leaking out into the Earth’s oceans and other aquatic ecosystems.”

Samsung issued a press release on the partnership, proclaiming: “Samsung’s new Less Microfiber Cycle and Filter are the products of that collaboration… A breakthrough in the fight against microplastics, the Less Microfiber Cycle cuts microplastic emissions by up to 54 percent. Now available in Europe, the cycle will roll out to compatible washers in [South] Korea from February this year and in the U.S. soon.”

So, here we are 30 years after the Fortune Magazine list was published, and both consumers and retailers (and their trading partners) are beginning to think about “ESG” (environmental, sustainability, and governance). Few have ever said that fundamental change happens quickly- but change does come. In the end, the RSR team decided that the best approach to the focus on sustainability needs to reflect consumer attitudes.

For RSR’s upcoming new benchmark on the state of merchandise planning in retail (which Steve talks about in his article this week – and which publishes tomorrow) we queried consumers about their careabouts, and learned that they have developed some ideas about what sustainability means when making their purchases (Figure 1): 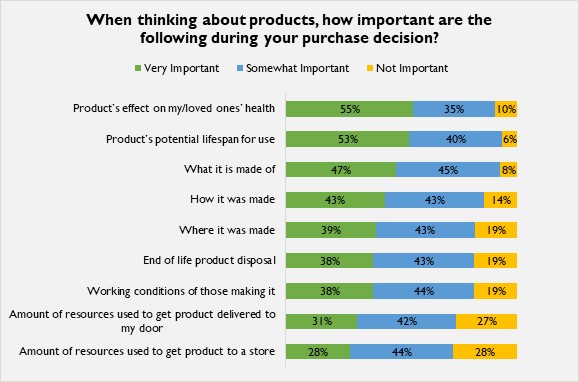 What really matters most to consumers relates directly to health concerns: what the product is made of, its overall lifespan and its direct effect on the user’s health. These are highly personalized concerns. And it doesn’t just stop with importance: shoppers tell us they are willing to pay more for products that meet their criteria (Figure 2): 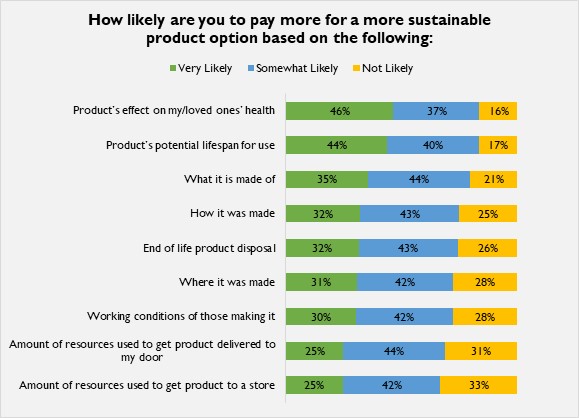 What Can Retailers Do Right Now?

Retailers – at least the over-performing ones – are certainly paying attention. In the new merchandise planning in retail benchmark, we noted that:

We explored this point further for a forthcoming study on the retail supply chain, and as we’ve come to expect, over-performing “Retail Winners” are far more likely to “get it” than average and under-performers when it comes to addressing consumers’ concerns (Figure 3):

Figure 3: Getting Down To Business 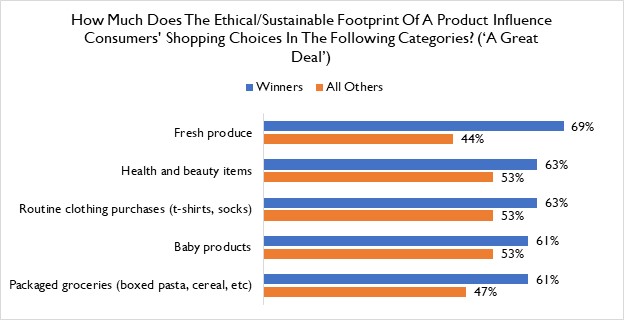 So, what can retailers do right now? The new RSR merchandising benchmark makes this recommendation:

…the tide is turning. Consumers are demanding sustainable product options – and at very specific levels of detail. Bigger-picture social and ethical issues may not be of interest to them, but what does matter is a product’s effect on their (and their loved ones’) health… Shoppers want better options, and there is tremendous opportunity for merchants to seize on this trend for the betterment of both the world and their bottom lines.”