Big Differences In How Verticals View The Value Of Location Analytics

Retailers’ responses to RSR benchmark survey questions can be really fascinating, but given the restrictions of our benchmark format, sometimes we have to leave interesting tidbits on the cutting floor.

That’s what happened when my RSR partner Paula Rosenblum and I were drafting our benchmark report, Location Analytics: New Data, New Opportunities (January 2018). It being our first look at if-and-how retailers see the opportunities created by geo-spatial analytics, the data was chock-full of “aha! ” moments. The overall gist of the report was that it’s still early days for how retailers plan to use new data generated principally by consumers’ GPS-enabled mobile devices. But the industry is excited about using location analytics, to determine store and DC locations, to localize the offer, and to better target value messaging to consumers.

But here’s a data point that didn’t make it to the full report. It turns out that there are significant differences in focus depending on what kind of products a retailer sells, and some of the differences are counter-intuitive (Figure 1). 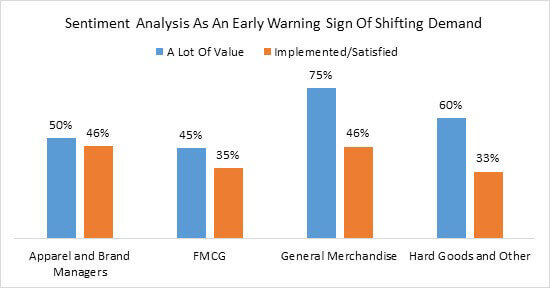 While retailers across the different verticals, performance, and size all agree that “more targeted marketing ” is essential to their future well-being, some of the priorities they assign to other capabilities enabled by location analytics are almost jarring, given the context of the challenges that retailers in different verticals are facing.

For example, why would almost twice as many fashion retailers as fast-moving-consumer-goods (FMCG) and general merchandisers (GM) rank “improved merchandising plan localization ” as a high-priority? After all, fashion retailers introduce new collections every season, and typically execute relatively few replenishments after the initial allocation is delivered to the stores. Grocers, drug stores and big box merchants on the other hand have many more SKUs in their standardized assortments and replenish very frequently. The opportunities that would result from assortment localization based on customer-centered analytics are far greater.

And why would almost twice as many FMCG and GM merchants as fashion merchants value location analytics to make smarter store site selections? Grocers and big box stores don’t flip locations nearly as often as fashion retailers do. Paula frequently talks about how fashion and specialty retailers are moving towards shorter and shorter leases. Those retailers – and particularly vertically integrated brand retailers – also have a huge opportunity in pop-up store strategies. But it’s hard to imagine such a strategy working without strong location analytics to back it up.

What are we supposed to make of these findings? Well, aside from the obvious need to put much more relevant content in front of consumers as they use their mobile devices to inform their shopping journeys, retailers have a lot to learn about locations analytics’ capabilities and promise. That’s a challenge for those companies who are selling location analytics solutions to retailers. They either have put their backs to the wheel and educate the industry, or they have to find early adopters who are willing to be showcased.