Our annual store study always delivers the goods. As shoppers, we get more frustrated each year by the “old” store shopping experience; it’s grown stale. As analysts, though, that frustration fuels the way we ask the questions in our annual research in an attempt to get not just the “what” – but also the “why” – that has left stores where they are. So in this year’s store study, we got creative: what would change if money was no object?

When we take the question of finances out, the answer presents itself: retailers know their stores are desperately lacking modern technology. And the figure below shows just what they think would help fix things most.

Figure 1:If Money Were Not Object 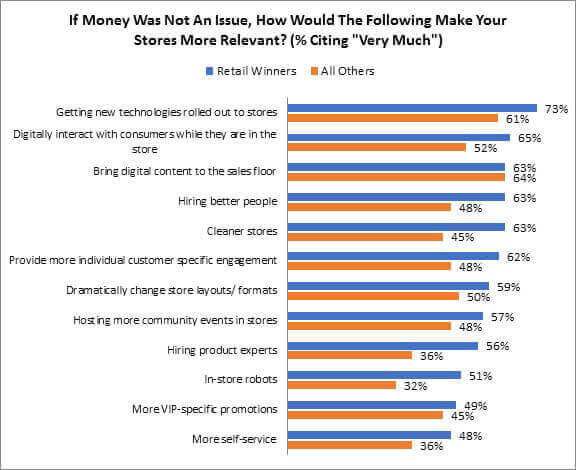 This data is significant for many reasons, but chief among them is it shows that complexity is not the only issue. We didn’t ask “what if we took the challenges of getting systems to work and play well together away?” We also didn’t ask about integration challenges or the human know-how needed to keep these systems running properly. We asked purely about the economics. The result is reassuring: it’s not just that retailers are afraid to act, it’s that in times of duress they revert to their tried-and-true thrifty and risk-averse ways.

The plain truth is that this tendency hasn’t always served them well in the past, and it’s not serving them well now. BUT – it is something to work with. It’s very difficult to convince someone why they should modernize – or that they could, indeed, modernize. It’s much easier to get them take action if the only real issue is parting with a buck.

Putting The Money Back In

When the filter of reality is reapplied, our point of view is only strengthened: less than half are willing of the best performers say they are willing to put new technologies in stores the moment money becomes an issue. The situation is so difficult that they aren’t even willing to invest in cleaner stores.

Figure 2: The Actual Future Look Of Stores Is… Similar? 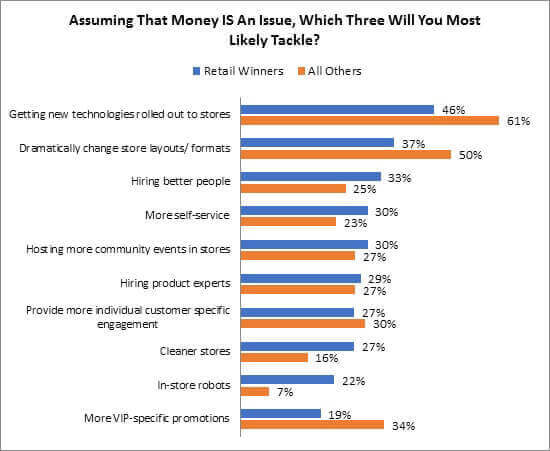 The harsh reality is that retailers, as exposed by this line of questioning, show a concrete predilection towards inactivity. “I’d have cleaner stores if I only had more money” is not an appropriate response. And it is indicative of a type of thinking that there’s no point in “trying” – across a great number of clearly attractive options – without more cash in the till.

This is not an if/then scenario: there won’t be any additional finances for in-store robots, or product experts – or cleaner stores, for that matter – if retailers don’t take seriously the need to up their game: even with the resources that they already have.

If you have not yet had a chance to read the report, it’s full of great data like this. But if you’re starved for time, we’ve made an eBook version, as well. We hope you enjoy them both.