Wanna Fix Stores? Empirical Evidence Of What You Might Be Missing

Our annual Store Report hasn’t even come out yet, and already I can’t stop talking about some of the things we found this year. For starters, we asked different questions. In today’s constant conversational environment of doom and gloom, of course we wanted to know about year-over-year progress in attitudinal shifts about what role the store will play in the future. And as we’ve been saying for some time now – stores will survive. The question is which ones – and in which form? So we also wanted to know about where retailers are budgeting for new in-store technologies as well.

But we asked questions this year that help us get to the “how ” of these issues a lot more than in the past. And one of them in particular… well… one was a real eye opener.

We asked about in-store employee training. Not only what does the right amount look like – by specific job titles – but later on, what kind of training do these titles actually receive on an annual basis.

The big takeaway? In theory, retailers think training their store personnel is fairly important, but there are serious snags in how much those personnel receive – particularly at the store associate level. The people charged with interacting with customers simply don’t have the skills to hold an educated conversation.

Further, does a retailer’s performance affect training efforts? To answer that, we also posed the question from another angle, probing retailers for when certain job titles receive only 10 hours – or less – of training each year (Figure, below).

Look at the disparity between how qualified/educated laggards think new store associates should be, and how much help they actually provide them. 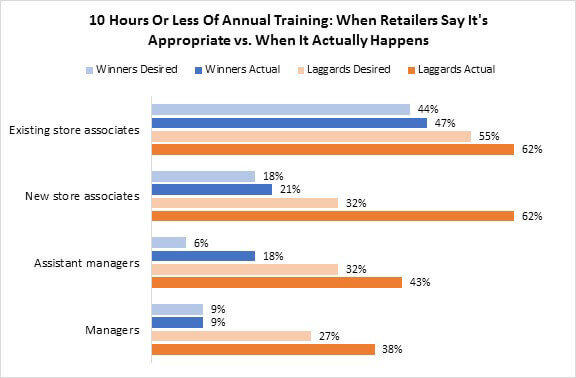 Consider this: 18% of Retail Winners say that 10 hours or less is enough training for a new store associate to receive each year. We asked this question in a vacuum, mind you, where money is no object. How such a high number of successful retailers say this is appropriate is already emblematic of a larger issue. Some consumers, for one single product, easily conduct 10 hours of online research before they enter a store. In what world could someone who is supposed to serve as a brand ambassador – with less than 10 hours of training annually across thousands of SKUs – expect to be able to compete with that?

And when it comes to their underperforming peers, nearly twice as many laggards admit that, even in a perfect world, they don’t think their employees need anything more than a handful of hours to get onboarded, up and running, and familiar enough with the company, its culture, its Brand Story, and all corresponding tech systems and customer-facing matters to carry them through a full year. This is hard evidence of a systemic breakdown in many retailers’ belief of what successful retailing once was – or could skate by being – and what it now needs to be.

Conversely, we can see a similar trend unfold when we look at these same job functions through a different filter. How does desire stack up to reality when we’re asking retailers about enough training?

Quite simply, if a retailer is looking for a cornerstone measure that can help fix their store-based problems, this would be a great place to start.

We can’t wait to put out the full report in a few weeks.