The Development Backlog Drives IT To The Cloud: Mostly

This year, RSR is publishing its first benchmark covering the state of Cloud Computing in Retail. We think overall, you’ll find the results as surprising as we did. But one data point in particular jumped out.

We asked respondents which departments could make best use of Cloud Computing. Respondents were free to “check all that apply. ” The most frequently cited department by a pretty broad margin was… wait for it: IT. On the surface this is not surprising, as the theme of the report has become Cloud satisfying the need for retailers to go faster when it comes to implementing new technologies.

Since we had an unusually large percentage of respondents who said they were part of the IT group (50% of total respondents), we thought we’d compare IT and Line of Business Executive responses. The results were sort of jaw-dropping (see Figure, below). 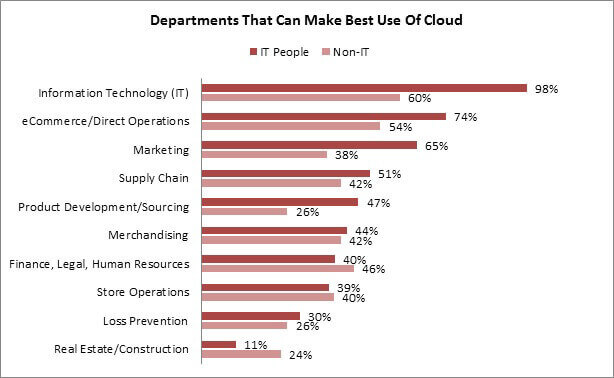 I mean, holy cow: that’s a statement. The people responsible for delivering applications overwhelmingly are declaring defeat, and looking elsewhere for solutions to their challenges. At least that’s the way Brian and I, as former CIOs read it.

Now, it may not seem completely clear to the reader, looking at this chart in isolation, why we came to that conclusion, but for now, you’ll have to trust us. In short form, it turns out that Cloud is way more than just a delivery vehicle, and way more than just a way to flex hardware needs for seasonal peaks. And while there is resistance within the IT groups to “give up ” control, the reality is, they need to support the business, and they hope Cloud will help them do it.

You’ll note that 98% of IT folks believe they can make the best use of Cloud. Who are the other 2%? Well, this week, Dick’s Sporting Goods announced that it has developed its own software for inventory tracking, and will complete a complete in-house overhaul of its web site as well.

Apparently, their CIO, Paul Gaffney followed the same approach when he was CIO at Home Depot.

This news leaves me sort of speechless. It’s very hard for me to believe that in this day and age, home-grown systems are part of any retailer’s core competency, or that they would spend the time and money and resources developing them.

I’m sure Mr. Gaffney knows what he’s doing (I have never met him), but I’m still gob smacked. After decades of convincing, retailers finally have understood that their job in life is not to be technology artisans, but rather to be technology consumers. Their core competency is in the buying and selling of merchandise people actually want, not systems development.

I suppose all I can say is two things: I wouldn’t do it, and I wouldn’t do it. J When you’re a company the size of Dick’s, you can have a certain amount of sway over your software vendors’ development process. Heck, some of my current clients were former providers for me when I was a CIO. They will tell you that even in my SMB retailer role I was able to join their customer advisory board and get changes implemented that we needed.

The message here is, you can be part of the 98% or part of the 2%. The choice is yours, but if you’re going to join the 2%, you’d better make sure you’re good, fast, and able to shift as customer needs shift.

The other message is I can’t wait for you all to see our first report on Cloud Computing. Sometimes it’s fun being wrong. The data didn’t lie, though. There are still some issues around Cloud, and you’ll see them in the report, mostly around communication about upgrades and some presumption that it’s the new “magic bullet, ” but overall, you, our respondents, have made me a believer.