RSR Benchmark Preview: The Hype vs. Reality Of AI In Retail

Whenever Artificial Intelligence (AI) and Machine learning (ML) come up in conversation, someone will raise concerns about the potential for those technologies to trigger a dystopian future where automation completely replaces the human workforce, “killer robots” are able to select and engage targets without meaningful human control, and ultimately some super machine somewhere decides that carbon-based lifeforms are redundant.

Don’t believe me? Here’s just a sampling of recent headlines:

Meanwhile in the retail industry, much more practical concerns about AI and ML are on the minds of decision makers. There is a veritable ocean of “external” data available to retailers that theoretically can be used to help retailers better understand the environments they operate in. RSR recently queried retailers about what those external data are, in here’s what we learned (Figure 1): 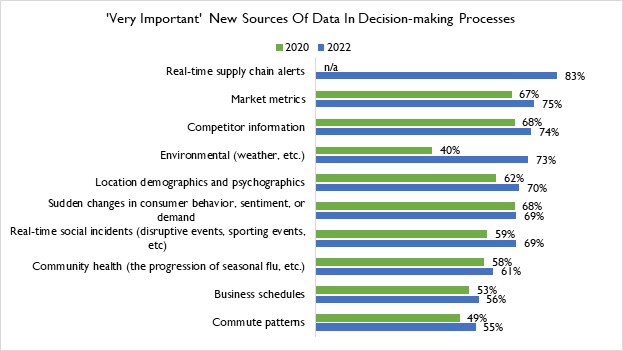 So, we’re good to go, right? Wrong. AI is not plug-and-play, and although it’s the latest and greatest way to analyze data to create insights, making it work for the business take a lot of expertise. David Sweenor, Founder of TinyTech Media, recently published a piece on LinkedIn that is well worth a read. David sought to bring expectations of AI down to earth:

“Artificial intelligence (AI) was supposed to be the panacea for a huge range of business ills, but it doesn’t always produce positive, actionable outcomes. Why is this? More and more organizations currently use AI, machine learning (ML), or data analysis in their operations, yet the business value from these implementations simply isn’t being realized.

“There’s a range of reasons why AI is flailing rather than surging ahead. People struggle to understand what AI really does, and its limitations….”

The author then goes on to expose 8 myths about AI. But he concludes on a hopeful note:

“… The business outcomes from data science, when done well, could be all those things that were promised. Faster, better, stronger, the superman of organizations.

“But to use AI on an organizational level there needs to be broader understanding of what it can do, and where it’s not going to be useful. Otherwise, it’s simply another of those 80-something percent of data science projects that never get off the ground. To get ROI on your data science investment, be realistic about what AI can do, and apply it judiciously to well defined projects with great data. While that doesn’t sound as enticing (and easy) as plug-and-play-and-predict-the-future, it’s a far more successful strategy to get the results AI can deliver.”

Despite that enthusiasm, progress-to-date appears to be very slow (Figure 3):

Why might this be the case? In his LinkedIn article, Mr. Sweenor offers an explanation:

“When a business or client says they want a drill, a good data scientist knows they actually want a hole…. <but> the reality of data science is that the industry is lacking talent; there simply aren’t enough quality data analysts and scientists… Organizations don’t have (or can’t find) appropriately skilled data scientists as staff, and so outsource to third party providers. Replying on external vendors is only a short term fix; domain knowledge is vital to produce accurate results.”

That certainly appears to be the case in retail (Figure 4).

The bottom line for now is that retailers appear to be past their initial enthusiasm that AI will be a panacea for all kinds of problems, but they certainly see the value in using new data to better inform their business decision making processes… and that AI/ML is a technology that will help them to get there.  So ultimately, it’s the insights that retailers are after, not the technology.

RSR’s Upcoming Benchmark On The State Of AI In Retail

Look for a new benchmark from RSR in the end of September that uncovers where retailers are with AI adoption, which use cases are driving that adoption, and what is standing in the way. As always, the new report will offer practical advice for retailers, based on how over-performing Retail Winners are deploying AI to address real-world business challenges and opportunities.

And as always, the new report will be free to all!