Just about two years ago, JDA introduced its new CEO Girish Rishi at the 2017 JDA Focus event. Mr. Rishi had only been in the job for a few months at the time, but he promised some big changes. After that event, RSR commented: “<the CEO> talked about improvements JDA is making in its offerings for planning, distribution, and retail, to ‘consume data science’, sense information at ‘the edge’ (data generated from the edge of the enterprise and beyond, such as social media, IoT, and ‘externalities’ like the weather), and JDA’s API-driven integration strategy …. “.

What was apparent at the meeting was that that the leadership hoped that the capital infusion from Blackstone and New Mountain Capital would trigger some energy and innovation at JDA. And as we opined in the review of the 2017 event, that was much needed because to a great extent JDA was living off of the revenue streams created by their legacy solutions (I2, Intactix, etc.). Although by 2017 the company had made strides in offering new solutions on the cloud (Retail.me), it was apparent that incremental modernization of its legacy portfolio was not going to be enough. Corporate customers were moving ahead with their own digital transformations, and JDA needed to do more to help them.

Fast forward to 2019, and JDA has symbolically changed the name of its marquee event to JDA ICON (held in Dallas earlier this month) and has put forward what Mr. Rishi calls JDA’s “moonshot “, a next-generation supply chain suite powered by predictive analytics, to be “prescriptive ” and “self-learning “. At the center of that vision is JDA’s most recent acquisition, the BlueYonder AI/ML analytical engine. Mr. Rishi declared that “what Salesforce is for CRM, JDA is for Supply Chain! “

In an analyst breakout session, Wayne Usie, JDA’s Chief Market Development Officer, further underlined the vision, saying that JDA is trying “to achieve a major breakthrough in supply chain ” by enabling an “autonomous supply chain ” enabled by “automated decision making based on AI/ML <Blue Yonder> “. Ultimately, said Mr. Usie, JDA’s platform will enable a “network of networks “, fundamentally improving how trading partners in the supply chain work with each other to deliver products to market faster and more efficiently.

That’s a pretty big claim, but that vision underlies how the company is now positioning itself to be a platform rather than a portfolio of solutions. Alex Price, JDA’s Group Vice President for Global Alliances, Partnerships & Technology Ecosystem Strategy, explained that the company is investing in the technology to enable a “partner first ” strategy. By “partners “, JDA means two communities: supply chain partners and technology partners. But most of the conference’s presentations focused on enabling technology partners, highlighting the pressure JDA is putting on itself to modernize its entire offering.

Key to that is the company’s strategic partnership with Microsoft. JDA currently has migrated 11 applications to Azure; as part of that, JDA is migrating all of its cloud-based solutions to SQL from Oracle by year-end (although on-premise JDA solutions that use Oracle will continue to be supported). For its part, Microsoft is taking a decidedly “open ” approach with the Azure cloud environment; for example, all major DBMS’s are supported, and Azure will support Linux and open source solutions.

Organizationally, Microsoft has adopted a verticalized focus, with industry-specific industry programs and partner ecosystems. Mr. Price highlighted how the JDA/Microsoft partner ecosystem enables “innovation through partners and customers “, citing two examples with Theatro and Zebra Technologies. JDA has established what it characterizes as an ecosystem of tools and capabilities intended to encourage co-innovation, including a partner portal and a public-facing “Solution Marketplace ” that showcases contributed solutions.

JDA As A Platform

To enable the “platform” strategy, JDA is investing new R&D money to build out what Executive Vice President and Chief Development Officer Desikan Madhavanur an “end-to-end realtime, AI-enabled ” set of cloud-based capabilities that can be more responsive to sudden changes in demand. Said the software leader, “customers are now ‘in the network’ – that’s why network data is so important to understand a unit of demand. The network is very unstable and constantly changing. The supply chain must be able to operate in this environment, adjusting to realtime conditions. Legacy processes and systems assume a steady-state… it’s just not true anymore. “

To address these challenges, the CDO highlighted the JDA platform this way (Figure): 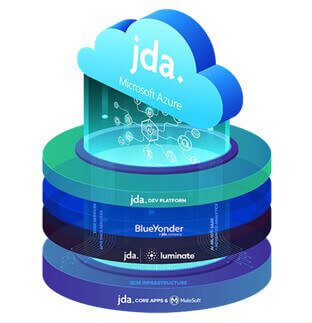 The platform is specifically envisioned to enable a network of partner-contributors that can add realtime capabilities to core JDA applications; of particular note are the JDA Luminate layer (edge technologies sandwiched between the cross-platform integration and BlueYonderAI/ML to automate operational processes) and the open development platform sitting on top of it all (to enable co-innovation in the partner network which is enabled by Azure).

When it comes to enabling the retailer side of the supply chain, Desikan talked about how JDA is addressing three sets of processes: Retail Planning, Category Management, and Store Operations. Later is the conference, JDA’s Jim Prewitt and Dave Ritchie outlined how Retail Planning will be a complete rewrite of the software, while Category Management is targeted for web enablement and AI integration, and Store Execution will benefit from IoT enablement and improvements in Labor Management including “lifestyle labor management “. It’s an understatement to say that there are a lot of moving parts – so stay tuned.

All of this is representative of a major shift in JDA’s thinking, and it echoes some of what we heard just a few weeks ago at the Aptos meeting (see Aptos Is In A Big Rush on the RSR website). After the recent Aptos Engage meeting, I wrote: “Consumers aren’t going to wait for retailers while they engage in expensive and risky ‚Äòrip and replace’ strategies, and so retailers have become focused on modernizing their technology portfolios by front-ending operational legacy capabilities with (frequently cloud-based… solutions. ” JDA apparently see the same challenge – businesses are changing so quickly that a static set of capabilities isn’t enough. Solutions providers have to be able to provide new capabilities as fast as the market needs them, and it’s all being driven by consumer adoption of new technologies in their daily lives.

But whereas Aptos is focused on offering a “broad set of customer engagement services ” via the Cloud, JDA is coming at it from the supply chain side of the retail enterprise. Both companies recognize that retail customers will be living in a hybrid (both cloud-based and on-premise) mode of operation for some time, and that is why both companies are so focused on enabling their cloud-based offerings with an API integration layer (JDA announced a partnership with Mulesoft – now part of Salesforce – in 2017 to accomplish this). Other companies are also seeing a big upswing in corporate interest in API management systems to help companies “front end ” their legacy systems with new cloud-based capabilities, and RSR saw strong interest in this strategy in our recently published benchmark on the state of cloud computing in Retail.

JDA’s vision is big and bold, and the company is pushing hard to make it real. It touted some recent successes (for example, Morrisons in the UK). And while the company has made some false steps over the past 12 years (for example, an abortive attempt at a rewrite of several core apps after its acquisition of Manugistics in 2006), this strategy is fueled by a customer base that really needs the help, and the market readiness of the Cloud, AI/ML, and IoT. The company’s strategic partnership with Microsoft solidifies the direction.

I’m reminded of the old Chinese curse, “May you live interesting times “. That’s where JDA and its customers are now – in interesting and exciting times.